There is a myth that pork ham is a lean part of the meat, so you may not be able to cook a tender and juicy steak. Knowing the ins and outs of meat preparation, you will definitely be able to enjoy a wonderful table during the holidays. It’s no secret that sometimes the recipe “caught” on the Internet does not always work, so listen to the advice of a specialist. You will be helped by the advice of Norfa’s head butcher Dainjaus Bartosjaus. Seven steps to a delicious steak

First of all we travel to the store and choose meat. D. Bartoshius advises to choose a ham with skin, you will prepare a juicy steak from such meat.

Secondbefore cooking, it is recommended to keep the meat at room temperature for half an hour to warm it up – the ham will cook faster, it will be tastier and it will lose liquid during cooking.
Thirdmeat should be placed in the oven or baking dish so that the fatty part is on top, and the fat and juices that flow during cooking moisten the lean layer below.

The fourthD. Bartoshius recommends placing a lean steak in a baking sleeve or baking sheet to prevent moisture from evaporating, but just before the end of cooking, cut the sleeve and open the baking sheet to allow the meat to brown. Lean meats can be made extra moist by basting them with the juices that have been separated from the cooking pot.

Fifth, do not forget to put the meat only in a preheated oven and cook it for the first half hour at a high temperature of 230-250 degrees, to prevent the resulting crust from drying out the meat and juices. don’t run away After that, reduce the temperature to 130-160 degrees.

The sixth rule – the bigger the steak, the more it weighs, the lower the temperature and the longer it needs to be cooked.

The seventhDo not forget to support the cooked meat so that it can “rest”, the juices will be evenly distributed in the roast and the meat will be more tender. 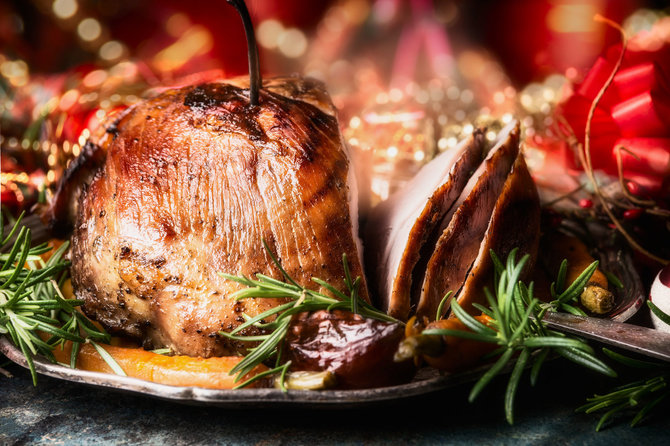 How to calculate salt

For a novice in the kitchen, it can be difficult to answer a simple question – how much salt do you need? D. Bartoshius says that the calculation is very simple: 10-15 g (1-1/2 teaspoons) salt is needed for 1 kg of ham to dry-pickle ham.

Next, we mix the marinade – we mix salt with spices. “I think the perfect ingredients for ham marinades are oil, pepper, herbs (thyme, oregano) and garlic,” says the butcher.

D. Bartoshius advises to marinate a ham weighing about 1.5 kg for about a day. Marinating the meat in a baking bag is very convenient, so that you can turn it from time to time and absorb the flavor of the spices in deeper layers.

My favorite ham is marinated in soy, slow cooked

D. Bartoshius’ favorite ham is marinated in soy sauce and slowly roasted at low temperature. For this dish, you will need about one kilogram of pork ham, which you will put in a cooking bag. For the marinade, mix about 100 g of soy sauce, crush a clove of garlic, add a little pepper, add a few spoons of olive oil, add a teaspoon of honey.

Pour this mixture on the meat in the marinated bag, tie it, twist it well so that the spices are evenly distributed on the meat, and put it in the refrigerator for a day. Cook the ham at 100 degrees for 4-6 hours. Cut or tear the prepared ham into muscle fibers and serve.

“Meat prepared in this way can be eaten as a hot dish, shredded meat can be put on hamburger buns, wrapped in Mexican tortillas or anything else you can think of,” says D. Bartoshius. 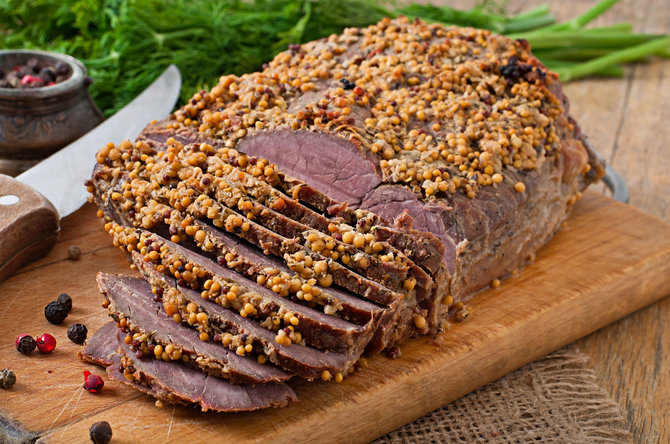 You can find a recipe for drip-fried ham in old Lithuanian cookbooks. It seems that the food should be delicious, but the production process needs to be modernized. D. Bartoshius insists that it is not difficult to cook such a ham: you will need a ham weighing 1 kg, make finger-sized cuts with a knife and glue drops cut with a straw to them. Then rub the ham with a mixture of spices and salt, put it in a baking bag and marinate for a day.

Preheat the oven to 180 degrees and cook the ham in a baking bag or closed container for about 1 hour. time After an hour, cut the baking bag or open the container, increase the cooking temperature to 200 degrees, turn on the fan function of the oven and cook for another half hour until the ham is well browned. D. Bartoshius advises not to forget the mushroom sauce, which is just perfect with this Lithuanian ham. Fry the onion in a pan until golden, add the marinated mushrooms and fry a little. Pour this sauce over the cooked ham. 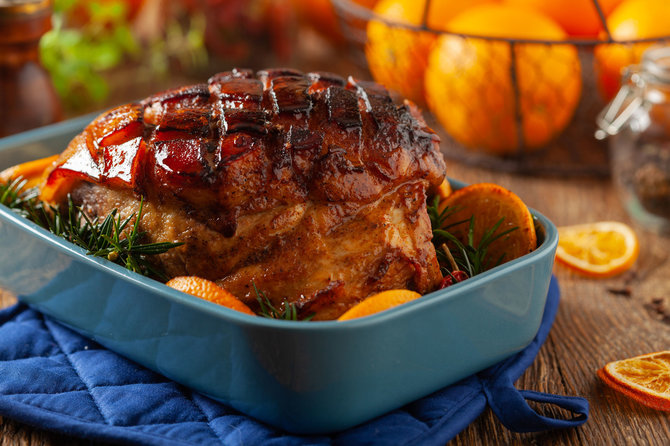 Try another recipe and enjoy European cuisine. A caramelized crust with a hint of mustard gives this ham a delicious flavor.

Put the ham on a baking sheet or tightly wrap it with baking foil and bake in the oven for 3 hours. 45 minutes at a temperature of 160 degrees. Remove the ham from the oven, raise the temperature to 180 degrees. Drain the liquid from the baking dish, rub the ham with mustard, cover with sugar and brush with honey. Cook for about 30 minutes, spoon off any liquid that drains and pour over the ham.

When the glaze has caramelized, remove the ham from the oven and let it rest for about 45 minutes. During cooking, the honey and sugar caramelize and coat the meat in a flavorful, shiny coating, while the juices from the steak thicken, making it the perfect sauce for meat and side dishes. 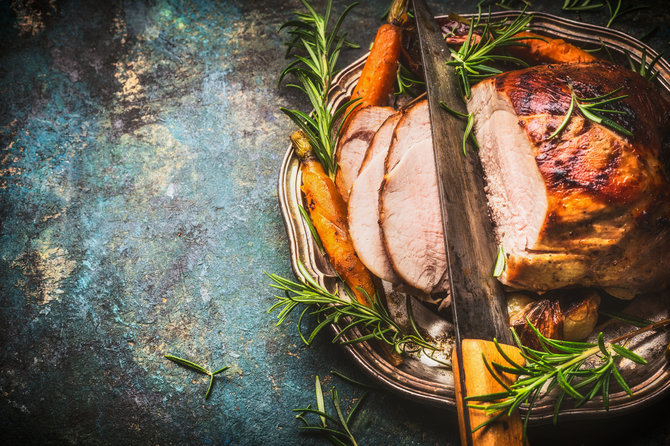 This Christmas, we won’t be able to invite a group of guests, but we will be able to enjoy an impressive-sized baked ham as a family. Ham marinated with herbs for several days will be incredibly fragrant and juicy. The baked ham skin is so crispy that each piece is a fun competition.

With a sharp knife, carefully cut through the skin of the ham, leaving a diamond every few centimeters, cutting carefully, only through the skin and fat layer to the meat. Mix the salt, sage, orange peel and pepper in a bowl and rub the mixture over the ham. Place the meat in a plastic marinating bag, turning it over every day, and refrigerate for 4 days. Remove the marinated ham from the bag, dry it with a paper towel and keep it at room temperature for 2 hours.

Heat the oven to maximum temperature (260 degrees), place the ham bone side up. Cook until the meat is well browned, about 20 minutes, reduce the temperature to 160 degrees, add 1 cup of water to the baking dish, cook for about 1 hour. Add 2 cups water, add star anise.

Continue cooking, adding water every 45 minutes if needed. When the temperature of the meat inside the steak reaches 60 degrees, cook for another 1.5-2 hours. Place the prepared ham on a wooden cutting board and let it rest for about 30 minutes.

Pour the juices from the baking dish into a cup, skim off the fat, add the orange juice, chicken broth and simmer until thickened and about 1 cup of liquid remains, about 20 minutes. Add butter and stir until melted. Pour the prepared sauce into a jar and serve next to the ham.