According to Jolanta Sabaitiene, fruit and vegetable expert of Iki trade chain, quoted in the press release, lychee comes from China, where it has been cultivated for more than 4000 years.

Lychees are very small – usually they weigh about 20 grams. In Asia, this fruit is called the “king of fruits” because it is rich in various beneficial nutrients. Also, because lychees look a bit like strawberries, they are considered a symbol of romance and love in China.

Be careful when choosing

According to a fruit expert, there are a few things to look out for in order to choose the tastiest lychee. First, press the skin with your thumb, if the fruit is ripe, it should be a little soft. Lychees should be peeled, peeled and stoned before eating.

“The peel of these fruits is easy to peel with your fingers. Lychees should be peeled as easily as oranges. Finally, cut the peeled lychees in half with a knife and remove the stone, advises J. Sabaitene. 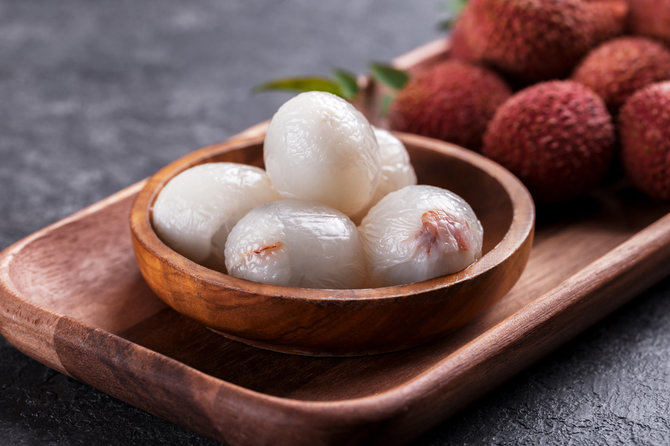 Goes well with cheeses and meats

Lychee is often eaten as a snack. However, they can be used much more widely in cooking. For example, they go well with various cheeses, especially goat’s milk or cheddar.

Oatmeal, granola and smoothies can be flavored with lychee.

Lychees are added to fresh fruit salads, they go well with banana, coconut, mango, passion fruit or pineapple, citrus fruits and ginger. A variety of breakfast foods can be flavored with lychee: oatmeal, granola, breakfast shakes.

In Asia, lychee or its juice is often added to various sauces combined with savory dishes such as chicken or various fish and seafood. 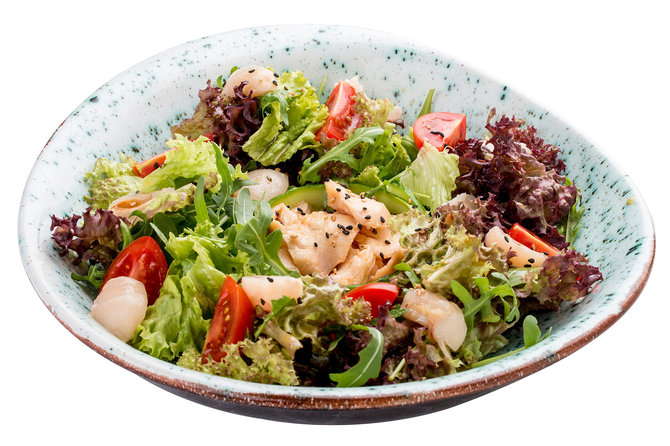 Lychee syrup is often made from these fruits. It is prepared very simply – lychee is boiled in water with sugar. Lychee syrup is an excellent sweetener for cocktails, tea and other beverages. It is also often used to flavor ice cream or sherbet.

In addition, lychee goes well with vanilla or chocolate, says J. Sabaitje, and shares three recipes that use lychee creatively.

1. First prepare the sauce: chop the hot pepper, add the rest of the ingredients and mix everything.

2. Mix the shrimp, mint, coriander, lychee, sprouts and half of the peanuts with the sauce.

3. Put everything on a plate, sprinkle with the remaining nuts and onions.

Salmon with lychees and greens

1. First, prepare the marinade for the salmon: mix the fish sauce and 2 teaspoons of sugar.

2. Put the salmon in the marinade and keep it in the refrigerator for about 10 minutes.

3. Heat the oil in a pan and fry the salmon until well browned on both sides.

6. Pour the resulting sauce on the salad and enjoy.

1. Peel and cut all the fruits, leaving only the soft, edible part of the fruit.

2. Add the prepared fruit, ice cubes and herbal drink to an electric blender. Rub until the mass is very smooth and homogeneous.