According to Vilma Djoudkazien, food expert of the Iki chain, quoted in the press release, this salad is one of the most popular and popular Greek dishes not only in Greece but also abroad. This salad is called Greek choriatiki – this word is translated as “village”.

“Greek salad is probably the most authentic Greek dish. It was loved not only by the Greeks themselves, but by people who eat it all over the world. “This is a particularly light and healthy food that provides energy and strength, useful substances for the body, but does not cause stomach and digestion problems,” says the food specialist.

The secret of Greek salad

The composition of Greek salad is very simple, but quality ingredients are very important. They usually consist of fresh tomatoes, cucumbers, onions, olives and, of course, a large portion of the Greek favorite, feta cheese. Greek salad is especially popular in the warm season because it is really fresh and very easy to prepare. 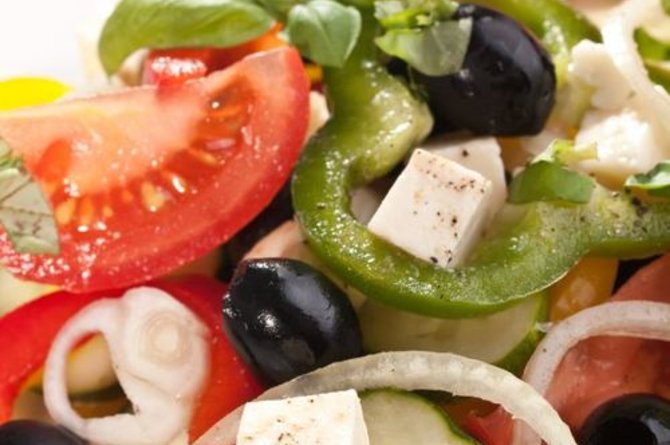 1. Cut the tomatoes into slices and place them in a medium-sized bowl.

2. Cut the cucumber and pepper into pieces and pour over the tomatoes.

3. Clean the onion, cut it into slices of medium thickness, put it on top of the vegetables.

4. Sprinkle olives and coarsely chopped feta pieces on the side.

5. Prepare the dressing: mix the olive oil with the wine vinegar and oregano in a separate bowl, shake well and pour over the salad, seasoned with coarse salt and pepper.

It is believed that the ancient Greek physician Hippocrates started eating this salad at the beginning of lunch. He said that eating green vegetables before lunch is the basis of a healthy diet. Because green vegetables are easy to digest and rich in vitamins.

Greek salad became popular in the seventies of the last century, when tourists began to flock to Greece in large numbers. According to a food expert, crafty restaurateurs have found a way to “circumvent” the price set by the government for a simple salad with tomatoes, cucumbers and onions by putting a big chunk of cheese on top. So this improvement on the simple salad allowed them to charge much more for the salad than was previously accepted. 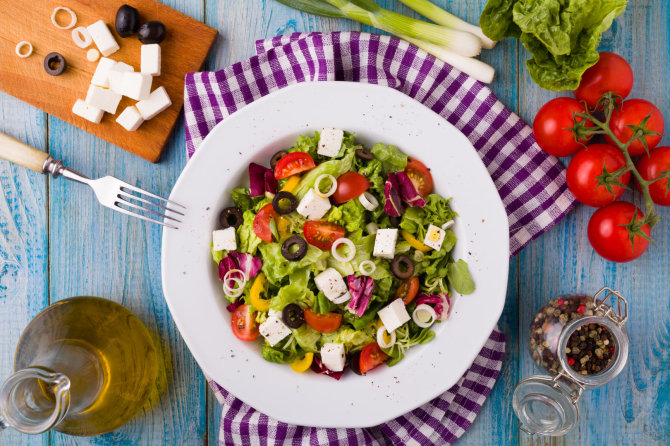 V. Juodkazyene says that the most diverse versions of Greek salad have become popular recently. He advises not to be afraid to experiment with the sauces and products used.

“Recently, you can often find the most original versions of Greek salads: they are served with meat, fish or cereals, and even small changes to diversify the diet can bring new flavors and aromas to popular dishes,” emphasizes the expert.

Greek salad can be filled with chicken, beef, turkey, salmon or other favorite fish.

According to him, if the Greek salad is improved with a few additives, it can be even more charged with vitamins and nutrients. Greek salad can be filled with chicken, beef, turkey, salmon or other favorite fish. You will be surprised, but different cereals with high nutritional value are perfect for this salad.

V. Juodkaziene suggests trying several original Greek salad recipes. All you need to season them is some avocado, barley flour and salmon.

Greek salad with cereal and avocado

1. Put the groats in a pot, pour water (the ratio of barley groats and water should be 1:3), heat until the water boils. When it boils, reduce the heat and cook the cereal until all the water has been absorbed. If foam appears during boiling, skim it. Salt the powders at the end of cooking. During the process, it is important to monitor the consistency of barley groats and not to overcook them. Leave the boiled powders to cool.

2. Add all the other Greek salad ingredients to the bowl, and lastly the cooled barley groats. Mix everything and enjoy. 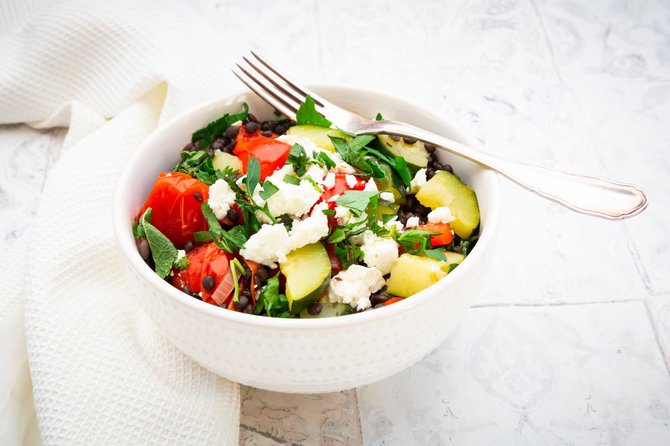 1. Place the salmon on a preheated, greased grill pan and cook for 6-8 minutes on each side. And another 2-3 minutes. Then carefully remove the salmon from the pan, sprinkle with salt and let cool.

2. Put the salad ingredients in a salad bowl, mix and finally add the salmon cut into small pieces.