They are even more nutritious when boiled

Maximos’ head of food production, Brigitta Baratynskaite, says that spinach originated in ancient Persia, reached Europe in the Middle Ages and became firmly established in the kitchens of Italy, Spain, England and France. This vegetable was especially popularized by the Jews of the winter region, who used the salad to prepare many dishes, and now Lithuanians often choose spinach, according to a press release. 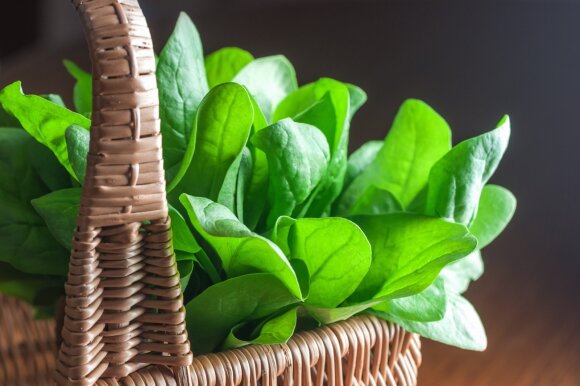 “There are so many and inventive uses of spinach in the kitchen that you can even make desserts from it – ice cream, cakes, vegetarian delicacies. Additionally, when adding vegetables to soups, salads, stews, or sauces under normal circumstances, choosing the right type of salad dressing is important. The most popular is small spinach, usually eaten raw, but they can easily be boiled. Broad-leaf or curly spinach is larger and more robust. They taste better when they are cooked. In addition, the green leaves of this salad are rich in calcium and iron, which are absorbed when the vegetables are cooked. The reason for this is the oxalic acid contained in spinach, which inhibits the absorption of these minerals, but the latter disintegrates at high temperatures,” says B. Baratinskaite.

The fact that it is worth eating spinach as often as possible is confirmed only by the enormous benefits of this salad. B. In Baratinskaya, they have a lot of minerals, vitamins and nutrients, which is why they are called the healthiest vegetables in the world.

“There are a few tricks that come in handy when cooking spinach. When steaming vegetables here, the leaves soften and dry quickly, so there is no need to season them until the end of cooking. You can also cook this salad. The leaves are then immediately boiled for a few seconds and usually used for the further cooking process. Spinach can also be fried briefly at high temperature. Then the taste of vegetables will come out and their special aroma will be revealed,” says B. Baratinskaite. 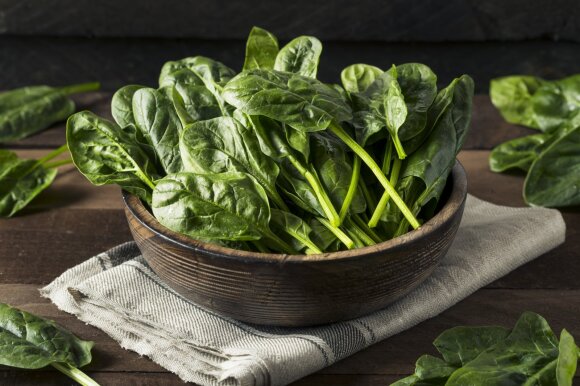 According to him, the original recipes for using this salad in the kitchen are useful for adding spinach to the daily diet in a tasty and varied way. So the culinary expert shares the latter.

Heat a little oil in a pan over medium heat and fry the onion for 5 minutes. Then pour 50 ml of water and cook for another 7 minutes until the onions are slightly browned. Add garlic and ginger to them. Then mix coriander, cumin, turmeric, add pepper, mix with 2 tablespoons of water, add to the pan. Cook for another 5 minutes and mix with chickpeas. Prepare the broth, pour in the mixture, add the almond butter, then the spinach, cook for another 3-5 minutes. Serve with steamed rice, delicious!

Place the spinach, honey, milk, vanilla extract and ice cubes in the bowl of a milk blender. Mix all the ingredients well. Then, put the mixture in another container and store it in the freezer to freeze. Serve the ice cream in a waffle cone or bowl and enjoy.

“These recipes are very simple and quick to prepare. Spinach dish can be made in 20 minutes, ice cream in five minutes. But, most importantly, you will see how tasty these vegetables are, which wonderfully diversifies the usual family menu,” laughed B. Baratinskaite.