Vilma Dzuodkazyene, food expert of the Iki chain, says that by adding a few ingredients to this popular dish, it can acquire new colors and flavors.

The holiday rush is already felt

Vaida Budriene, the communication manager of the mentioned trade network, notices that Lithuanians are gradually preparing for the holidays. According to him, during the holidays, buyers are more sophisticated about food and pay more attention to its quality.

“The festive rush is felt more and more, and the first snowfall reminds us that the most beautiful winter holidays have already begun. We see that chain buyers are preparing more responsibly for Christmas, planning their menus in advance and experimenting more with recipes. During the holidays, people choose more complex ingredients: not only traditional carp or pork, but also shrimps or mussels, duck, various delicacies are often found in shoppers’ baskets, and sales of prepared mixes also increase during Christmas,” said V. Boudrien says in a press release.

The recipe was made by a Frenchman

Food expert V. Juodkaziene says that although there are those who believe that the popular white mixed dish is Lithuanian food, this is far from the case. It is said that in the 19th century, this wonderful salad was created by the French chef Lucien Olivier, who worked in Russia. To please the aristocracy, he decided to present this special dish inspired by French culinary traditions.

The basis of the salad he made was eggs, boiled and pickled vegetables. In addition, the chef can flavor this salad with different meats or even fancy ingredients like lobster.

Soon the recipe for this salad spread throughout Eastern Europe and over time became a traditional New Year’s dish. Although this mixture is usually made of potatoes, carrots, beans, pickled or pickled cucumbers, eggs and mayonnaise, its recipes often change. Some are limited to vegetables, others add meat: sausage or ham. There are also those who flavor the white mixture with nuts or fruits and berries – some add apples, others – dried cranberries.

Traditional ingredients are not limited

According to V. Dzodkazyene, if you are bored with traditional white mixed recipes, you just have to use your imagination.

“This salad will have a bright flavor if you season it with roasted, smoked chicken or duck. Those who want to have an even more refined taste can add their favorite fish, shrimp or caviar garnish to the salad bowl. In this way, the taste of this dish is not only bright, but also looks attractive on the table,” he says.

When preparing this traditional mixture, the expert advises to cut vegetables that have already cooled, because they will not fall apart. Also, the mixture gets the best texture when all the ingredients are cut into very small squares. It is also recommended not to multiply potatoes. Because then the mixture will be light and will not burden the stomach. Also, the more potatoes you add to the mix, the more mayonnaise you will need.

“Traditional salad can be seasoned not only with mayonnaise. If you want a light texture, mix mayonnaise with Greek yogurt and season with salt and black pepper, and if you want a little sourness, you can squeeze a few drops of lemon juice. In addition, the sauce should be poured before putting the ingredients on the table. If you want an even fresher salad, you can use green beans instead of canned beans, and you can also make cucumbers. If you want, you can add celery, capers and even olives to the salad,” says V. Yuodkazyene shares a recipe for a white mixture that will become the fashion of the festive table. 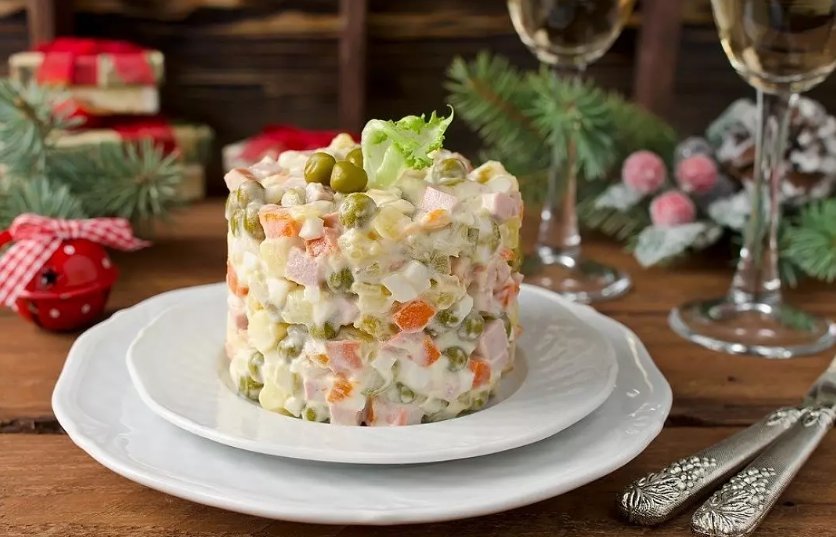 Wash unpeeled carrots and potatoes and boil. Hard-boil the eggs in a separate pot – 7-10 minutes is enough. Peel the cooled carrots, potatoes and eggs and cut them into cubes. Also cut the cucumber. Finely chop a small onion. Put all the ingredients in a medium-sized bowl, add salt, black pepper and finely chopped dill and parsley. Add at least two large spoons of mayonnaise and mix everything well. Tasty!